Not bad, not great 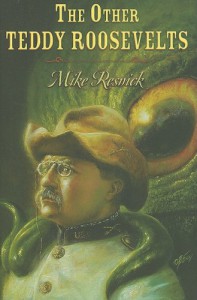 Not bad. If you've read any SFnal anthology since the middle 1980s (earlier, actually, but I'm too lazy to go look up his first appearance in print) you've read some Resnick. I'm no big fan of his pedestrian writing, but I'm a BIG fan of TR.

Red Whitechapel puts TR at the centre (cause it's in Lunnon I misspelled center, see?) of the Jack the Ripper hunt. Resnick even says he wrote this to get some attention for a theory he proposed in a non-fiction article published in the 1970s regarding his (quite plausible and eminently sensible) idea of who and what the real Ripper was. Wasn't much impressed by the fictionalization. 3 stars

Two Hunters in Manhattan was a real eye-roller, TR making the acquaintance of an ancient Greek vampire who, inexplicably, pays no slightest attention to TR's request for assistance in specific ways but instead whimsically decides to do it his own way. Who knows, maybe that comes with having blues eyes, black hair. 2 stars

The Roosevelt Dispatches puts Teddy in Cuba and has has him meet the Martians from Wells' The War of the Worlds. Okay. 3 stars

Bully! got the otherwhen versions of TR rolling in Resnick's creative world. Nominated for the big awards. I enjoyed this one. 3.5 stars

The Bull Moose at Bay is the most intriguing story to me...how TR got to where he is at the beginning of the tale is deeply satisfying, the place where the tale takes off is spot-on, and the ending is also satisfying. My quibble is why be coy about the identities of the birthday party guests? Still, hands-down my favorite. 4 stars

Over There was depressing and unlikely. TR was too full fledged a politician to fall for what happened to him; the ending was inevitable and seen clearly from the beginning. 2 stars

The Light that Blinds, the Claws that Catch is unmemorable and uninteresting. 3 stars because it's competently written.