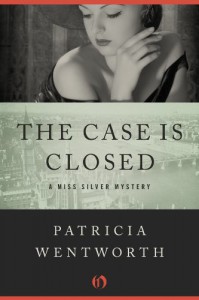 Trust in me all in all, or trust me not at all, folks, this offers the modern reader mysteries few of the pleasures we presently expect. The pace is killed dead as a rock by the documents the author plops right in the beginning, and later the documentary urge is revived right at the end. It's deadly dull because it goes on too long. It works to get dreary information fed to you, the reader, but wowee toledo does it bog the pace down.

The author relies quite heavily on coincidence as well as Death by Documents. The number of fortuitous encounters between Miss Hilary Carew and Mrs Mercer! Gracious goodness me, the way they practically bounce off each other like billiard balls you'd think England was some teeny-tiny little island or something! I live on a quite small barrier island off the south shore of a bigger island and I don't coincidentally run into people I absolutely *must* encounter above once a week. /sarcasm

The sexism is really surprising. Miss Hilary Carew wants her big, dashing Captain Henry Cunningham to Save Her from Them! This despite the fact that she does a damned good job of saving herself, thank you kindly, and Henry shows up only when muscle is genuinely required. Dishrag Mercer lives in terror of her abusive husband, who never lifts a finger against her just utters horrifying threats and brandishes a knife there's no evidence whatsoever that he knows how to use. When unwelcome guests invade her home, Mrs Marion Grey simply doesn't throw them out, she endures and endures and then finally, when Miss Hilary Carew her cousin as well as roommate arrives, she simply retires to her room in a State of Nerves. The lower-class women are dimwits and cry positive rivers of annoying, soppy tears. That sexism is there at all is the surprise, since none of the women really need the men to solve their problems. Miss Maud Hephzibah Silver least of all, of course.

And there's the other latter-day reader's lament. Where the hell does Miss Silver (casually dismissed for being a woman more than once) keep herself? She appears at convenient moments with convenient facts. Outside that, the twenty-first century reader's expectations of becoming intimate with our sleuth is an unmet need. We don't see Miss Silver do diddly in the way of detecting or even walking around, she just seems to use Floo Powder and apparates onto the scene of whatever action she can best bring to a screeching halt as she omnisciently moves the dramatis personae into the proper configuration for the ending to occur.

Since I've kvetched this little opus into the weeds, why did I give it three and a half stars? Because it's a surprisingly astute and subtle indictment of the annoying tropes it deploys. Miss Silver, Miss Carew and company aren't dishrags the way the poor women are. There are several quite formidable housekeepers and chambermaids. The latter is the one who asks the question that is at the heart of the (not terribly challenging) mystery. The author, a redoubtable soul in her own right, seems to me to be draping the fig-leaf of sexist silliness onto her competent women. She was sixty the year this book was published...1937...and seems to me to be sighing somewhat impatiently at the continued necessity to pretend that women are silly little chits without the ability to Think in their scatterbrains.