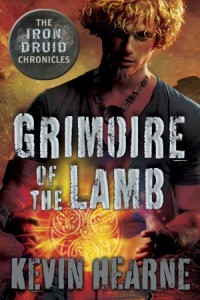 The Publisher Says: There's nothing like an impromptu holiday to explore the birthplace of modern civilization, but when Atticus and Oberon pursue a book-stealing Egyptian wizard - with a penchant for lamb - to the land of the pharaohs, they find themselves in hot, crocodile-infested water.

The trip takes an even nastier turn when they discover the true nature of the nefarious plot they've been drawn into. On the wrong side of the vengeful cat goddess Bast and chased by an unfathomable number of her yowling four-legged disciples, Atticus must find a way to appease or defeat Egypt's deadliest gods - before his grimoire-grabbing quarry uses them to turn him into mincemeat.

My Review: Set before the events of Hounded, this 30-ish thousand word novella is a treat. Bast the cat goddess gets Atticus and Oberon in a pile of scary trouble; Sobek the crocodile god is a complete nightmare; and Atticus isn't meeting them for the first time. It's stuff like this that makes the series such fun, this long memory of cool, scary stuff that, in another writer's sweaty paws, would be Utterly Portentous and Hypercharged with Meaning. Hearne, middle aged himself, writes the stuff like it's a middle-aged 2000-year-old Druid's bar stories. I like that.

The $2.99 the ebook costs is fine for entertainment received. At $1.99, I'd be insisting everyone buy it immediately. As it is, don't read this first but equally don't miss it. Atticus and Oberon (scandalously underutilized here!) are good value for money.